Not Left-Wing, Not Right-Wing, but Catholic! Musings on the Papacy and the Church

A growing phenomenon to be observed in the contemporary Church is the ever increasing partisan mentality that divides Catholics up as left-wing or right-wing, liberal or conservative. It's not that these divisions have not been around for some time - they have. It's just that with the age of social media and twenty-four hour news it becomes increasingly easier to construct religious-political narratives and disseminate them far and wide across multiple digital platforms. This is worrying development, especially, when these narratives are used to drive a wedge between Papacies, and different groups within the Church. 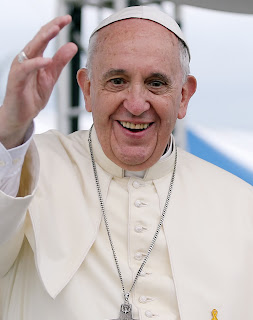 The recent furore concerning the Amazonian Synod is, I believe is an example of this. A narrative is being created that is attempting to cast Pope Francis, the Vicar of Christ, as some kind of a neo-pagan, left-wing liberal heretic. If this was coming from outside the Church I would be less concerned, but the division is emerging from within. A comparatively small but vocal group, among them some theologians and some high ranking clerics, are it seems, hell-bent on creating this self-fulfilling narrative. At present, the crisis does not exist in the minds of most Mass-going Catholics, however, the more it is talked about and hyped up - the more a 'crisis' emerges.

A brief look online and you will come across headlines along the lines of: 'The worst Crisis the Church has ever faced' 'The most Damaging Papacy Ever.' (I mean really?...study some church history, please!) I am not going to spend time defending Pope Francis here. He is the Pope, the Vicar of Christ, and I trust that the Holy Spirit is with the Church and with the Magisterium just as it always has been. Christ promised to build his Church on the Rock of Peter and the gates of hell would not prevail against it – and Christ's promise is enough for me!

What is worrying, however, is the way in which some Catholics speak about the Pope in the public forum. Some simply refuse to refer to him as the Pope, referring to him as 'Bergoglio'.  Others speak about him using language that is not appropriate for a Christian to speak about anyone, let alone the Vicar of Christ. Communion with the Pope is a mark of Christian unity, so it is deeply concerning that some 'faithful' Catholics and 'Catholic' media outlets are taking to social media and attacking this communion in the most pernicious of ways. To disagree with the Pope is one thing, but to do so publicly, to disrespect him, to mock him, to twist his words and to not give him the benefit of the doubt, is to my mind, sinful.

What lies at the heart of all this? Well I would remiss if I didn't think that there was a spiritual dimension to all of us. The Pope's detractors are quick to use colourful language to infer that what is happening is the work of the devil – they may well be right, it's just that they may be playing a bigger part in the work of the deceiver than they imagine!

Another significant factor I believe is a lack of vision or rather 'focus'. By this I mean that our focus, as faithful disciples, should be on Christ and not on a need to preserve our own fixed idea of what we think right-religion should look like. When we are focused on the wrong things and too-fixed in our ideas it becomes very hard to listen to what the other is saying. Furthermore, when we fail to hear the other person, we fail to see them as a person and it becomes very easy to demonise them; be they another Christian, a politician or even a Pope. One of the gifts that I believe that Pope Francis brings to the Church (from his Jesuit background) is the gift of discernment. Discernment is a process, it takes time and involves listening, talking and reflecting. Sometimes the process of discernment can be unsettling, but it is a necessary process in the path of Christian conversion. To discern properly we must have eyes fixed on Christ. Pope Francis has encouraged us time and time again to “fix our gaze on Jesus' face and become familiar with him.”1 Pope Francis, is I believe, helping the Church to rediscover the gift of discernment at a time when it is desperately needed. The discussions that take place in the Synods are part of the Church's rich discernment process. Theological battles have been fought at many a Synod and Council throughout the Church's long history. Animated by the Spirit, however, the Church discerns the right direction and moves forward confidently fixing her gaze on her divine Saviour.

As Catholics we are invited to have our eyes fixed on Christ, on his kingdom and on what he is doing. To fix our eyes on Christ, however, does not mean that we can ever fully perceive or understand what he is doing. Christ's Church is not some lifeless monolithic entity, in fact it is always moving and changing as the Holy Spirit brings it, evermore, to perfection. Whilst it is true that doctrine and revealed truths never change, the way in which these unchanging truths are communicated to an ever changing mission field inevitably must change. The mission field of course, is anywhere where the Gospel of Christ is lived, taught and preached – in short everywhere the Church is. In order to facilitate authentic change, without jettisoning the essential truths of the faith, the Church is safeguarded by the office of the Papacy and the Magisterium of the Church. This safeguarding does not mean that we do not talk about things, try and look at different perspectives and listen to where people are at. This is all part of the discernment process that the Church is on. If our gaze is fixed on Christ, however, and if we believe that he has not left his Church then this discussion and reflection, even when it encompasses areas that we are unsure about, will be fruitful and peaceful. If on the other hand, we are too fixed and ridged in our views of what we personally think the Church should look like, if we are fixed on maintaining a predominately Western model of being Catholic, then we will begin to panic. Then, we will begin to be moved and motivated by fear. Then, it will become easy to demonise what we don't like and don't understand.